Diving training Marseille in the National Park of the creeks with Aquadomia, specialist accelerated training tailored

Diving Marseille. Two inseparable words both scuba diving and Marseille are associated in their history, with memorable scuba diving sites that today are worth the classification in the National Park of the coves, in Marseille. An ideal site to do your custom dive training in private lessons with the Aquadomia diving school.

Aquadomia offers Padi or SDI or French diving training Anmp or FFESSM Level 1 Level 2 Level 3 Level 4 In France in Marseille to obtain your Padi diving certification open waterPadi Advanced, Padi Rescue Dive Yes Dive Master Padi or SDI or a French diving training certificate. Choosing diving in Marseille to benefit from a training course in private courses with Aquadomia, it is to be trained in diving on the sites that made the history of diving, in Marseille in the south of France, where Cousteau lived his first adventures.

Choose a diving training Marseille, and you will do an accelerated dive internship in the French capital of diving! Whether you are a beginner, whether you want to improve or Become a Dive Instructor, our custom dive training meets your needs!

Some dive sites in Marseille :

There are more than 50, most located around the main islands of Marseille: The islands of Friuli, the island of the glider, the archipelago of Ramesh composed of the island mayor, the island Jarre, Moyade, the island plane, the big and small Conglouë.... 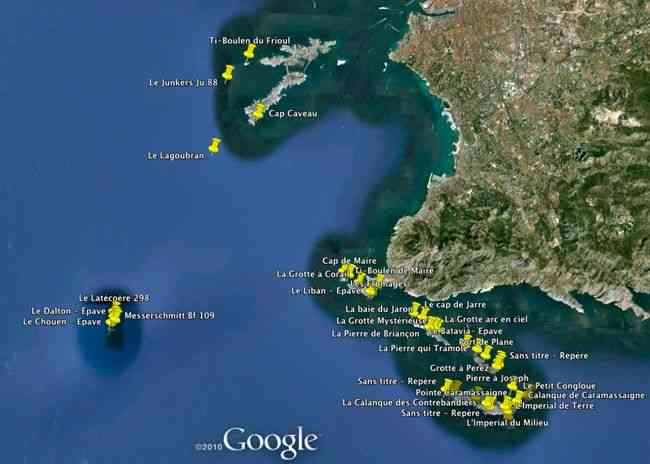 SOME EXAMPLES OFWRECKS DIVING IN MARSEILLE

Diving in Marseille on the wreck of a cargo ship: the Chaouen

The Chaouen was launched in 1961 in Travemünde, Germany. Cargo carrier of citrus, it measured 90 meters long, 13.5 meters wide and gauged 1,550 barrels. Its propulsion was composed of two engines of 1,370 CV.
On February 21, 1970, the Chaouen defeated the Moroccan flag and made its way to Marseille with 640 tons of oranges on board. The sea is calm, a light Mistral blows. Around 10.30 pm, the Chaouen struck the dry stone at the ring north-west of the island of the glider. His hull was torn to starboard and he finished his race in the small cove west of the glider. We still don't know how the ship got there. Navigation error, negligence of the captain or the crew?
Despite the intervention of the Provençal tug 15, the Chaouen remains stuck in the rocks. The Mistral has risen, the Provençal 15 must abandon its rescue at 2:30. Around 6am, the water invaded the bilges and the engine room. At 1.30 pm Captain Fret gave the order to abandon the cargo, and three quarters of hours later the Chaouen went to port to sink definitively. It sank on February 22, 1970. The bow remained emerged a few meters for about fifteen years.

At about 12 meters, the bow of the ship appears open. The wreckage is in excellent state of conservation. It is possible to dive at one time from the bow to the stern. At 36 meters you will see the bent propeller as well as the rudder. There are often dentis and very lucky moon fish in summer.

The Dalton diving in Marseille on the island of the glider

Cargo of 50.5 meters long which sank in the night from 18 to 19 February 1928. From Greece, he was carrying lead, hitting the stone reef with the ring. Despite all the crew's attempts to clear him, he sank in two in 45 minutes.

As well for the Chaouen as for the Dalton, diving is possible only if the sea is calm and the wind weak as it is a site very far from Marseille and thus in the middle of the mar and little sheltered.. The bow of the Dalton is directed towards the island. Located in the rocky scree at a depth of 15 meters, this wreck suffered a lot. When you go to the back of the cargo, you start to recognize something from the central part of the ship. We can distinguish the machines and the boiler. The stern is in a good state of conservation. The railing resisted and the bridge survived by location. At 33 meters, the propeller and rudder are the pieces of choice of the wreck. Some groupers can be crossed when the site is not too busy.

Diving in Marseille on the wreck of a plane: The Messerschmitt

On March 07, 1944, this Messerschmitt was dark during a ditching following a chase.

The Messerschmitt is placed upside down on a sand bottom by 43 meters. The wreckage is very dilapidated. The 30 mm cannon in the propeller hub is very often home to a nice little conger. Both wings are always attached to the cabint. The tail and shank of the unit are bent. The cockpit is absolutely not accessible. We can still see the landing gear.  For the return, it is necessary to take the south until the fall, then the ascent can be made on two sides: either right hand rock to reach the wreck of the Dalton, or rock left hand to reach the wreck of the Chaouen.

Diving Marseille on the wreck of Lebanon

Shipwreck considered to be the greatest tragedy that took place in the waters of Marseilles. On Sunday, June 7, 1903 around noon, Lebanon leaves the port of Joliette to Corsica. On board, 220 passengers including 41 crew members. Following an error in manoeuvring, another vessel, the island, struck violently the port flank of Lebanon around 12.30 pm, near Mayor Island.

This wreck is easy to access since it is very close to the red Point port and an organized anchorage is located near the vertical of the wreck: Impossible to miss! The Stern is located at 36 meters. It is in good condition but it is cut off from the central part of the ship. You can still see the bronze propeller half buried in the sand. Going up to the bow, you will fall on the huge boiler that kept the traces of the explosion. The rest of the ship degrades over time. You can see groupers, dentis, lobsters, wolves, SARS drums, hidden congresses. At the end of the dive, it is enough to go back slightly after passing the bow to visit the magnificent arch of the Farillons. A must of Marseille diving!

In Marseille, diving training: Directly at sea with highly qualified instructors and available to you, here are some examples of highly demanded training;

To learn more and follow the news of Aquadomia and diving Marseille, you can also Visit our Dive blog.

Your dream Our mission! How far will you go?

"By filling out an order or reservation form or request for information, I agree to receive personalized marketing offers by email from Aquadomia. com in agreement with Data protection policy. I understand that I can unsubscribe from these communications at any time by clicking on the unsubscribe link present in all emails. »